Bald Head Island is a two-mile journey across the Cape Fear River from Southport, North Carolina. It is also the site of Old Baldy, the state's oldest standing lighthouse, circa 1817.

Our History — Living in Harmony with Nature 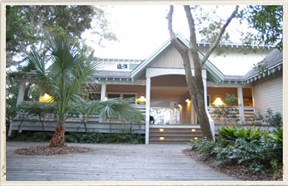 The original property owners who came to the island for a decade before there was electricity are called “The Generator Society.” It was their original vision of “living in harmony with nature” that has defined the future of the island and the need for a property owners association to protect that vision. Bill Smith, biology professor at Wake Forest University said “they’re exemplary in terms of what you might do to preserve an ecosystem as well as stabilize an island.”

In the mid-70’s,  the five original homeowners, along with property owners in the process of building, met and agreed that a property owners association was needed to create and uphold restrictions for the preservation, maintenance and thoughtful development of the island. This protection and supervision included open areas, such as the golf course and other recreational facilities; to prevent any greater density of population than proposed by the original developer, Carolina Cape Fear Corporation (CCF); and to hold the original developer and any subsequent developer to provide, maintain and develop roads, electric, water and sewer utilities and facilities. They discussed formation and basic initiatives that should be followed by the proposed property owner’s association.

These meetings resulted in a letter mailed to all Bald Head Island property owners to inform them of the meeting and its results. As part of this mailing, a return post card was included, requesting a favor/not in favor vote. With over 100 responses, only one person did not favor it.

The steering committee set up the structure at a meeting in February, 1975. The Bald Head Island Property Owners’ Association (BHI POA) was incorporated March 3rd, 1975 and the organizational meeting followed later in March. A charter and bylaws were approved, and officers and directors elected. Thad Wester was elected the first president. This was the forerunner of our Bald Head Association.

The original property owner restrictions, meant to protect the developmental premise, were put into place by the Carolina Cape Fear Corporation (CCF). If you did not like the restrictions, you did not buy the property. The BHI POA was directly responsible for saving the developmental premise when the economy faltered in the late 1970’s. By maintaining that premise, they were able to hold the development intact, keep the golf course open, and prevent the mass selling off of property, until the economy changed. The BHI POA had a deep commitment to what this island was supposed to be and to holding it together through the economy’s downward slump.

In 1982, it was inevitable that the developer, CCF, would reduce interest in the island. New covenants were created so that services and control of the destiny of the island could be transferred to the property owners. With anticipation of reduced involvement by the developer, the Association needed to have the authority to assess dues to provide services and require mandatory membership in the Association.

When CCF successors (Jim Harrington and Walter Davis) bought the island, new Covenants were negotiated, so that as the Developers decreased their interest, and the Bald Head Association (BHA), as it was now called, would have the authority to provide services in an orderly fashion.

The next change came when the Mitchells bought the island. A community government system was now needed to get certain permits on the island (such as for alcohol sales). The Village Council was created, appointed by the property owners on a nominee basis coming from the Association. Later the charter was revised so the Council was elected by resident property owner vote.

The Village of Bald Head Island was established in 1985. The formation of a municipality diminished the need for the BHA to maintain typically government-provided services. The BHA’s primary functions and assessments now support advocacy, the obligation to oversee the Covenants and Architectural Review, protection of the common areas, and representation of the property owner, particularly non-resident property owners.

Today the BHA has approximately 2,000 members and is growing. The original vision of living in harmony with nature is still our point of reference. Our Covenants are our agreement to keep that reference and the Design Guidelines are our tools for mandating the Covenants.

To read more about the Generator Society click HERE.